Giving back, in remembrance 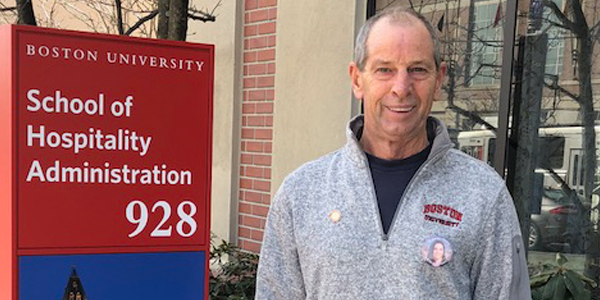 Tom Frost's ability to find strength in grief is awe-inspiring. Just two months to the day after the tragic death of his daughter, Lisa Frost (COM'01, SHA'01), in United Airlines flight 175 on 9/11, Tom completed a marathon in his hometown at the time, Rancho Santa Margarita, California.

Running, he says, gave him the emotional stamina to get through that time. He has also turned his grief to positivity in his generosity to Boston University. Tom and his wife, Melanie, Lisa's mother, honored her memory by sponsoring the Lisa A. Frost Student Lounge in the new School of Hospitality Administration Building.

"We had just received the settlement money for 9/11 victims from the government, and we wanted to give," says Frost, noting that they donated $70,000 for the lounge. A roomy oasis for on-the-go hospitality students, it features coffee tables, lounge chairs, and high-speed internet access.

Frost and Melanie, who died in 2018, worked closely with James Stamas, then the dean of SHA, to conceive the room.

Since then, Frost has kept close ties to BU. In 2001, he established the Lisa Frost Memorial Scholarship Fund, and he recently increased his bequest intention to $280,000 to benefit students at SHA.

"They showed how much they appreciated Lisa," he says. "It was so touching. When you ask me why I'm doing all this for BU, people don't forget; I don't, anyway.