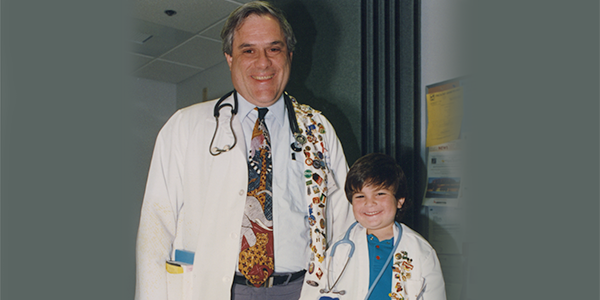 Siegel distinctly remembers how his BU experience helped shape his notion of what it meant to be a doctor. "I liked how integrated the School of Medicine was with the surrounding community," he says. "We were serving patients who were homebound, mostly elderly, and this is how they got their primary care. It's how I learned the art of medicine."

BU was the first step toward Siegel's 37-year career at the University of Southern California (USC)-a time during which survival rates for childhood cancers went from 20 or 30 percent to more than 90 percent. Siegel had a hand in this nationwide trend as the leader of USC's pediatric oncology program, which he shaped into one of the nation's top five while authoring more than 300 publications.

Today, Siegel continues to serve in leadership roles for organizations that help children with cancer. He has also provided opportunities for future doctors by establishing a scholarship fund. Recently, Siegel decided to augment this fund with a planned estate gift. This choice, he says, allows him to continue to provide for his family now while "making a real difference later on."

"When I got to BU, I needed as much assistance as I could get," Siegel says. "BU showed its commitment to me and its confidence in me then, and that's why I give back now."