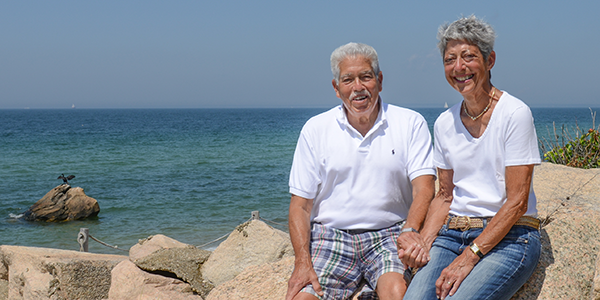 You could say that Larry and Honey Langsam practice philanthropy from inspiration.

In fact, their inspired gifts in the form of a cash gift and a bequest have had a significant impact on BU's Questrom School of Business and BU facilities.

The Langsams learned the art of philanthropy from Honey's father, Milton Berger, who was charitable and public-spirited, Honey recalls; Larry was inspired by his personal connection to people. The Langsams' cash gift to Questrom has gone into the dean's discretionary endowed fund, which means it can be used in a variety of ways, including scholarship assistance and program support.

Larry has had a long, successful career in the retail clothing business. But success for him has also meant giving back-and finding compelling ways of doing it. That's where parking lots come in. The Langsams have made gifts to name several parking facilities in the Boston and St. Louis areas. "Isn't parking the first thing you worry about when you're going out?" Larry asks with a grin. BU has recognized Larry and Honey by naming the brand new Langsam Parking Garage at New Balance Field in their honor.

Their bequest will benefit future generations of Questrom students. Both gifts, Larry notes, are meant to honor his education at BU and help other students to have the benefits he had: an excellent education, and a great start to a business career. "BU grew me up," he says. "It's where I learned to work with people. I want to honor that."