BU Through and Through 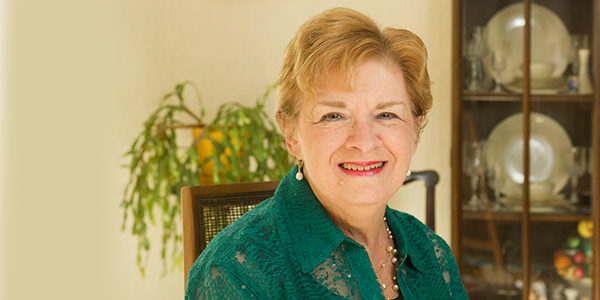 Beverly Abegg (CFA'64, GRS'68) may be one of Boston University's biggest fans.

Her connection to Boston University began before she decided to attend the School of Music. "I was the first in my entire extended family to go to college," says Beverly Abegg. "There was never any question."

Never any question, except, perhaps, what she'd study. She taught herself piano at a young age, playing by memory. "My parents were able, finally, to get a piano when I was in ninth grade," she says. Abegg began taking lessons with Pauline Dumont, a BU alumna, and it became clear that music would be an important part of her life. A bit more gradually, it became clear that BU would also be important.

"Pauline always said how much she enjoyed BU," Abegg remembers, and she knew early on that there was something special about the University. "It really made a difference that it was not just a school of music, but a whole university," Abegg explains. Attracted by her love of the city of Boston and the idea of a full university experience, she applied to Boston University.

Still, Abegg knew that even if she were to be accepted, there would still be a sizable hurdle: tuition. She began working after school and during summer vacation to save money. Finally, she was invited to campus.

"I went up for what I thought was my entrance interview," she recalls. Not only was Abegg informed of her acceptance that very day, but she was also told she had won a half-tuition scholarship. "It made a tremendous difference. From the time I could remember, my family would say, 'Beverly is going to college,'" she says. "So, Beverly did."

Abegg moved into the BU dorms, where she learned that part of the requirement for boarding freshmen and sophomores was waiting tables. "So, you always had a fallback," she says. "You had some waitressing experience, if all else fails. That was always the joke. Unfortunately, these days, it's not a joke."

As a mother, teacher, and wife of a retired professor, Abegg knows well the cost of a good education and how difficult it is to pay the sizable loans after graduation. She made the decision to support financial aid at Boston University, hoping to give future students that same moment of amazement and relief she had when she was told she won a scholarship to the School of Music. She also made that decision because, as Abegg says, it feels good to give back. "It's very special," she says with a smile. "I love it!"

She also funds scholarships for music students through her professional musicians fraternity, Mu Phi Epsilon. "I got involved with them at BU," explains Abegg, "and we have a foundation. We give out $60,000-80,000 worth of scholarships every year to musicians."

It's not just financial support that keeps her tied to her alma mater. "I go to events as often as possible, and I bring friends-to the theater, to the concerts," says Abegg. And her family is a BU family. Her youngest son, Scott (ENG'97) chose Boston University for his second degree, and her husband, Gerald, was a BU professor at the School of Education. "We met on the BU hockey message boards," she says. "Naturally, we bring people to hockey games all the time."

Visiting BU, bringing guests, and watching the University evolve have been sources of pride for Abegg. "We used to joke that the T was our campus," she says. "Now they've got new housing, a bigger campus, and Agganis, that beautiful facility." Impressed with the new opportunities for today's students at Boston University-and perhaps a bit envious-she says: "We never played at Symphony Hall when I was a there. It's almost worth trying to be admitted again!"